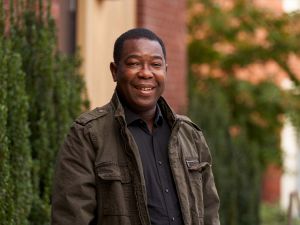 Habib Iddrisu is a traditionally trained dancer, musician, and historian from Northern Ghana, born into the Bizing family of court historians and musicians of the Dagbamba/Dagomba people. Dr. Iddrisu has toured the world extensively with traditional singing and dance groups, and has diverse experience as a performer, teacher, choreographer, and scholar throughout the U.S.

In Ghana, Iddrisu was honored with the Ghana’s Best Dancer award, given by the Entertainment/Art Critics & Reviewers Association in 1993. Iddrisu also led several prestigious traditional music and dance groups, including the Youth Home Cultural Group, which Iddrisu founded when he was just fourteen years old.  He was the creative director and choreographer for the Norvisi Dance Group and lead drummer and choreographer of Abibigromma, the resident performance group for the University of Ghana. Iddrisu was sought after to choreograph such events as the welcoming ceremonies for President Bill Clinton’s visit to Ghana in 1998.

Since arriving in the U.S., Iddrisu earned his bachelor’s and master’s degrees in African History and Africana Studies from Bowling Green State University, and his PhD in Performance Studies from Northwestern University. While studying, he taught and led performance groups at these universities. One group was selected by the National American College Dance Festival to perform at the Kennedy Center in Washington, D.C. in Iddrisu’s version of South African gumboot dance. Iddrisu served as a Presidential Fellow at SUNY Brockport in African Studies and Dance from 2008–2010. He also taught courses at Lake Erie College, Cleveland State University, Pacific University, Reed College, Portland State University, SUNY Brockport, before coming to the University of Oregon.

As a scholar, Dr. Iddrisu’s research interests include West African Music and Dance Practice and Performance, Cultural Studies, Post-Colonial Independence History, Political Economy, Oral History, African Diaspora Studies, and the New Internationalism. He explores new viewpoints on tradition, globalization, and popular culture, looking at the difference in discourse and rhetoric coming from indigenous peoples to the international performance and scholarly community. Dr. Iddrisu is currently researching how indigenous performance practices change and adapt to new situations as these practices travel from village settings to national and international settings.