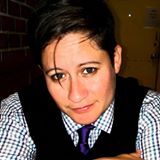 Saavedra is a historian specializing in 19th Century U.S. History, Borderlands History, History of the U.S. West, Chicana/o History, and Gender and Sexuality History. Her research interests include the intersection of race, power, identity, colonialism, nationalism, gender and sexuality.

Her recently released book, Pasadena Before the Roses:  Race, Identity, and Land Use in Southern California, 1771-1890, (University of Arizona, 2018) examines and details the social and cultural history of how Spanish, Mexican, American and Indigenous groups’ competing visions of land use affected the formation of racial and cultural identity in Pasadena, California, during this period. This work reconceptualizes how culturally subjective ideas about race, masculinity, and visions of optimal land use became tangible representations of political projects of conquest, expansion, and empire building.

Other research includes the recently published "Of Chicana Lesbian Terrorists and Lesberadas: Recuperatin the Lesbian/Queer Roots of Chicana Feminism, 1970-2000" (Feminist Formation, Summer 2022) and a forthcoming article in California History titled "Speaking for Themeselves: Rancheras and Respectabilty in Mexican California, 1800-1850," a project tracing the developing of a hegemonic ranchera femininty in nineteenth century Californio culture.

Saavedra is co-editor of BorderVisions a borderlands books series with the University of Arizona Press.

She is a the recipeint of the 2019 Western History Association Huntington Library Martin Ridge Fellowship, a 2021 Oregon Humantities Center Faculty Research Fellowship, a 2021-2022 Faculty Research Grant from the University of Oregon's Center for the Study of Women in Society,  and a 2022 Research Grant from the Center for Latino/a and Latin American Studies at the University of Oregon.